RISK: StarCraft, also known as StarCraft RISK, is a Risk board game produced by USAopoly. Its suggested North American retail price is $49.45.[2]

This board game features three play modes,[2][3] and the game comes with 330 custom playing pieces.[4] The game is intended to be easy for new players to pick up, and its play style is akin to classic RISK.[5]

It is based on the context of StarCraft and StarCraft II.[6] Terrans, zerg and protoss are playable,[2] and the game can be played by 2-6 players,[5] though is designed for 3-6—2 factions per species, though collectives can be played. Mineral fields are also featured in the game and there are three bases of operation per faction—command centers, hatcheries and nexi for terrans, zerg and protoss respectively.[6]

Of the three species, each has a hero unit, one for each faction. Each hero unit has a mechanic that helps them stand out from regular units. The heroes are as follows: 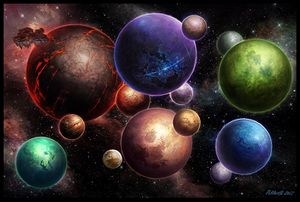 The worlds featured in the game

The game was originally based on Wings of Liberty, without the intention of including elements from Heart of the Swarm.[5] By June 2012, this had changed to include elements from StarCraft, its sequel and apparently the expansion of the latter.[6]