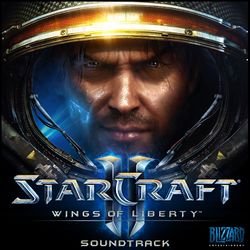 The StarCraft II: Original Soundtrack was published by Azeroth Music and released on July 27, 2010.

The StarCraft universe contains an eclectic array of musical influences, characters and situations which reach back to the original release in 1998 and its expansion set, Brood War. Most of the music was, at that time, realized on keyboards. Now, the StarCraft II: Wings of Liberty orchestra includes live, soaring horns, epic strings, biting synthesizers, a soulful dobro, harmonicas, guitars, choirs and a myriad of sonic colors, light and shade, intimate and loud.

From the space-cowboy terran marines, to the ancient prophecies of the protoss, to the hive-mind of the zerg—as well as the complex persona of marshal Jim Raynor, Sarah Kerrigan (now the Queen of Blades), and the infamous Arcturus Mengsk and the Dominion—each has a story, a mood, a timbre, a vibe to be supported and represented in the musical underscore. If Raynor can seem to pull his revolver a little faster, or if Tychus Findley’s presence can be a bit more imposing due to a theme or flourish in the music, then the composers and musicians have truly called down the thunder.

The music for StarCraft II was recorded in a wide variety of places and styles. Our quest for a classic "film score" sound led us to the legendary Skywalker scoring stage at idyllic Lucasfilm Ranch in Marin County, California. There we recorded 78 incredible musicians film-style, synchronized to picture. The players, who come from the San Francisco Symphony and Opera, are world-class, and definitely have earned the prestigious title of "Skywalker Symphony Orchestra".

Following the orchestral recordings, we journeyed to Seattle, Washington, where a 32-voice choir (triple-tracked to 96 voices) lent their talents to our music. The scoring mixer on both of these sessions was John Kurlander, who not only recorded the soundtrack to all three Lord of the Rings films, he also, as a young London lad, assisted the Beatles in recording "Abbey Road".

Finally, we found ourselves in Woodstock, New York, where several alumni of the Peter Gabriel band reside. There, we captured the Terran Band music in an old church-turned-studio called Dreamland. Band members included bassist Tony Levin, who has also played with John Lennon and countless others, along with drummer Jerry Marotta, who has performed at two of our BlizzCon events, and with Paul McCartney, to name a few.

Some local recording in the Blizzard studios, including Laurence Juber, formerly of Wings, and the legendary Tommy Morgan on harmonica, rounded out the music scope for StarCraft II, which clocks in at just over four hours of new music for the game and the many cinematics. Each composer selected favorite cues which, together comprise this album. We are extremely proud of the StarCraft II: Wings of Liberty soundtrack, and hope you enjoy this new addition to Blizzard’s and StarCraft’s musical legacy.

- Russell Brower, Director of Audio & One Of The Composers, Blizzard Entertainment