From Starpedia
Jump to: navigation, search
This article is a stub. You can help Starpedia by expanding it.

War chests are a seasonal feature[1] in StarCraft II. 25% of proceeds went toward the prize pool of WCS, and after $200,000 any further funds will go to operating costs on the tournament.

For each War Chest, players will do a one-time[2] nominal[1] payment, and receive a "treasure map" that they will level up by playing the game's multiplayer and or Co-op Missions. Everytime they level up the war chest, they will receive prizes. The prizes will not be random and will be predetermined. Loot from these chests include skins, emoticons, decals, portraits, and issues of the in-client comic series StarCraft II: Shadow Wars. Automatic rewards are given upon purchase of the War Chest, and at the end of a season, players will receive rewards just for participating. The War Chest loot works on a tiered system, each tier system unlocks more rewards than the preceding tier. There is a total of three tiers.

There will be one war chest per race, each having its own set of rewards. Unlocking one then purchasing another race's War Chest will give the player they made with that race. Experience gain for the War chests will be doubled in the last month to help players catch up.[3]

The seasons themselves are not tied to ladder seasons, but rather to WCS events. Alerts will be generated on the web and in the game's client to let them know when a war chest season has begun. All rewards for the War Chest will be purchasable after the even ends, but the War Chest provides a large discount.

A portion of the proceeds from War Chests goes towards StarCraft e-sports events and tournaments.[2] 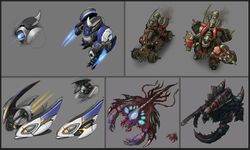